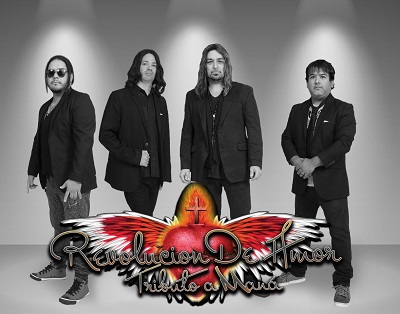 Maná is a Grammy-award-winning Latin American band that was formed in Guadalajara, Mexico in 1986.  The band would go on to become one of the best-selling and most successful Latin-American bands of all time.  The act first received international commercial success in Latin America and Spain.  From there, it didn’t take long for them to gain popularity and exposure in the U.S. and the rest of the world.

Most recently, Maná was honored with the ICON Award at the 2021 Billboard Latin Music Awards.

Revolución de Amor’s Tribute to Mana has claimed the nation’s heart with their stellar delivery of the Ultimate live Maná experience.

Re-live the evolution of Maná with Revolución de Amor’s Tribute to Maná.

Tickets are $25 or $35 plus tax and an online/phone ticketing fee (this fee is waived when tickets are purchased at The Market inside Rhythm City Casino Resort®). Tickets in the ADA section are for patrons with mobility disabilities and up to three companions. If companion seating is not available because the ADA section is sold out, Rhythm City will offer other seats as close as possible to the accessible seat, if available, at the purchase price of the original section.

Doors open at 7 PM for the 8 PM show. All ages are welcome to attend.