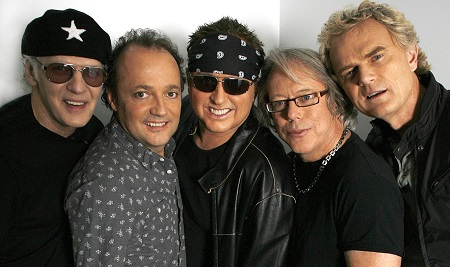 For more than 40 years, LOVERBOY has been “Working for the Weekend” (and on weekends), delighting audiences around the world since forming in 1978, when vocalist Mike Reno was introduced to guitar hot shot Paul Dean – both veterans of several bands on the Canadian scene – at Calgary’s Refinery Night Club.

After being rejected by all the major U.S. record companies, LOVERBOY signed with Columbia Records Canada, entering the studio with producer Bruce Fairbairn and engineer Bob Rock to record their self-titled debut album, which went on to sell more than 700k records in Canada.  Columbia U.S. released the album in Nov. 1980, which went on to sell more than 2 million albums in the States and four million worldwide.

Soon the band found themselves playing on mega tours with Journey, Bob Seger, Cheap Trick, ZZ Top, Kansas and Def Leppard, to name a few. They quickly became MTV darlings, being one of the first bands ever featured on the music channel.

With their trademark red leather pants, bandannas, big rock sound and high-energy live shows, LOVERBOY has sold more than 10 million albums, earning four multi-platinum plaques, including the four-million-selling Get Lucky, and a trio of double-platinum releases in their self-titled 1980 debut, 1983’s Keep It Up and 1985’s Lovin’ Every Minute of It. Their string of hits includes, in addition to the anthem “Working for the Weekend,” such arena rock staples as “Lovin’ Every Minute of It,” “This Could Be the Night,” “Hot Girls in Love,” “The Kid is Hot Tonite,” “Notorious”, “Turn Me Loose,” “When It’s Over,” “Heaven In Your Eyes” and “Queen of the Broken Hearts.”

Perhaps the band’s most famous song is “Working for the Weekend,” which has fueled a generation’s dreams of toiling every day for the chance to celebrate come Friday night. Dean realizes it has taken on a whole new meaning these days.

“You’re lucky if you can work for the weekend now,” he says. “We’re all fortunate to be doing that. My personal dream has always been to play guitar and entertain people,” he enthuses. “There’s no feeling like looking out in the audience and seeing them grinning ear to ear, everyone on the same wavelength. And once we start with the mega-hits, the place goes crazy. That’s why we do what we do and will continue.”

Tickets are $35, $40, $45, $50 and $60 plus taxes and additional fees (fees are waived when tickets are purchased at The Market gift shop inside Rhythm City Casino Resort). Tickets in the ADA section are for patrons with mobility disabilities and up to three companions. If companion seating is not available because the ADA section is sold out, Rhythm City Casino Resort will offer seats as close as possible to the accessible seat, if available, at the purchase price of the other section.