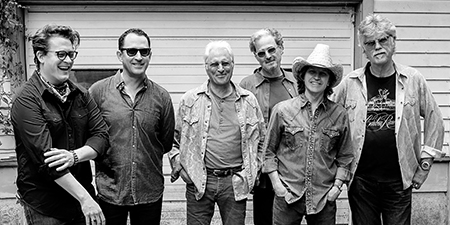 With a refreshed lineup and newfound energy, The Nitty Gritty Dirt Band remains one of the most accomplished bands in American roots music. Following an extended 50th anniversary tour, the ensemble grew to a six-piece in 2018 for the first time since their early jug band days. The group now includes Jeff Hanna (acoustic guitar, electric guitar), Jimmie Fadden (drums, harmonica), Bob Carpenter (keyboards), Jim Photoglo (bass, acoustic guitar), Ross Holmes (fiddle, mandolin), and Jaime Hanna (electric and acoustic guitar). All six members also sing, and when their voices merge, the harmonies add a powerful new component for the legendary band. And with the father-son pairing of Jeff and Jaime Hanna, the band carries on a country music tradition of blood harmony.

As the country music landscape shifted toward a youth market, the Nitty Gritty Dirt Band kept on touring and recording. They played on two projects by The Chieftains, cut a song with Karla Bonoff for an album dedicated to the 1996 Olympics, and contributed “Maybe Baby” to a Buddy Holly tribute, Not Fade Away. Another collaborative album, Will the Circle Be Unbroken, Volume III, arrived in 2003. Soon after, the band earned an additional Grammy for “Earl’s Breakdown,” which they recorded with Earl Scruggs, Randy Scruggs, Vassar Clements and Jerry Douglas. Meanwhile, both “Mr. Bojangles” and Will the Circle Be Unbroken were inducted into the Grammy Hall of Fame.

“The energy these days is so up -- and our fans have responded in a really great way,” Hanna says. “As a fan of other bands, I know how complicated it can be when members come and go. You can either embrace that or you don’t. Our fans are really gracious and I appreciate that. It’s been a really good run and there’s a lot of daylight ahead of us.”

Tickets are $45, $40, $35, $30 and $25 plus applicable online/phone ticketing fee (this fee is waived when tickets are purchased at The Market Gift Shop inside Rhythm City Casino Resort). All ages are welcome to attend. Tickets in the ADA section are for patrons with mobility disabilities and up to three companions. If companion seating is not available because the ADA section is sold out, Rhythm City Casino Resort will offer other seats as close as possible to the accessible seat, if available, at the purchase price of the original section.