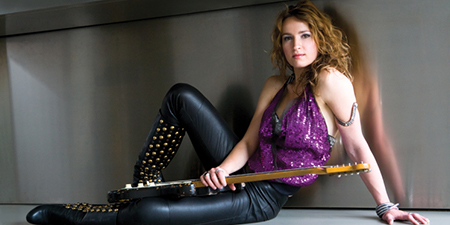 Our featured acts for the night will include Jamiah Rogers, Hal Reed and the headliner Ana Popovic. Jamiah is a Blue’s artist from Chicago who takes heavy influence from the legendary Jimi Hendrix, while Hal is a local legend and a Blues Hall of Fame member.

Celebrating 20 years as a touring musician, the award-winning guitar player, singer and songwriter Ana Popovic releases ‘Live for LIVE’, an exciting hour and a half CD & DVD demonstrating why she’s proudly looking back at a career of thousands of shows worldwide. This high-energy concert showcases not only Ana’s mesmerizing guitar skills but also her fabulous band, successfully merging musical styles. She’s called “one helluva a guitar-player” by Bruce Springsteen and nominated for seven Blues Music Awards nominations. Her albums ‘Can You Stand The Heat’ and ‘Unconditional’ were USA Today Picks-Of-The-Week and featured on NPR Weekend Edition, who praised her “Fiery technique on the Stratocaster”. Nearly all of Ana’s albums reached the top of the Billboard Blues Charts. She and her six-piece band have toured tirelessly, sharing stages with B.B. King, Buddy Guy, Jeff Beck, Joe Bonamassa and many others.

Like his father, Jamiah is also a multi-instrumentalist featuring drums, guitar, bass, piano and organ in his repertoire. At the age of 15, he started his first power trio band, Jamiah On Fire & The Red Machine. Jamiah was the lead vocalist and guitarist. In 2017, Jamiah recorded his first solo release, Blues Superman.

Hal Reed has a four-decade long tenure in Southern Gospel, Soul, and Blues music. He has headlined for several Gospel Festivals and toured over the last 30 years as Men of Blues and Mississippi Journey. In 2005 and 2020, Hal earned a spot at the International Blues Challenge, and in 2021 he was inducted into the Iowa Blues Hall of Fame. He has been featured in Big City Blues Magazine and in the on-line magazine, Blues Blast.

Tickets are $25 for general admission & $35 for center stage plus applicable online/phone ticketing fee.