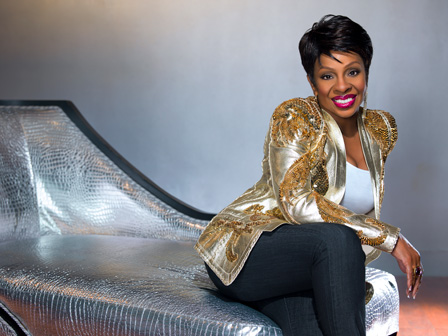 The great ones endure, and Knight has long been one of the greatest. Very few singers over the last fifty years have matched her unassailable artistry. This seven-time Grammy winner has enjoyed #1 hits in Pop, Gospel, R&B and Adult Contemporary, and has triumphed in film, television and live performance.

Debuting in 1960, singing lead at only 16-years-old, Gladys Knight & The Pips when on to achieve many Top 20 hits, like “Every Beat of My Heart,” “Letter Full of Tears,” “I Heard it Through the Grapevine” and “If I Were Your Woman,” setting the stage for an amazing run in the mid-1970s, with Top 10 gold-certified singles like “Neither One of Us (Wants to be the First to Say Goodbye),” “I’ve Got to Use My Imagination,” “Best Thing to Ever Happen to Me” and the #1 smash “Midnight Train to Georgia” establishing the group as the premiere pop/R&B vocal ensemble in the world.

All told, Knight has recorded more than 38 albums over the years, including four solo albums during the past decade: “Good Woman” (1991); “Just for You” (1994); the inspirational “Many Different Roads” (1999); and “At Last” (2001). “At Last” showed the world that she still has what it takes to record a hit album, employing the talents of contemporary producers like Randy Jackson, Gary Brown and James D.C. Williams III, Jon John, Jamey Jaz, Keith Thomas, Tom Dowd and Tiger Roberts.

A humanitarian and philanthropist, Knight has devoted to various worthy causes, including the American Diabetes Association – for which she is a national spokesperson, the American Cancer Society, the Minority AIDS Project, amFAR and Crisis Intervention, and The Boys and Girls Club. She has been honored by numerous organizations as well, including the NAACP Legal Defense Fund, Congress of Racial Equality (CORE), B’Nai Brith, and is a recent recipient of BET’s Lifetime Achievement Award.

Tickets are $55, $65, $80 and $125 plus taxes and additional fees (fees are waived when tickets are purchased at The Market gift shop inside Rhythm City Casino Resort). Tickets in the ADA section are for patrons with mobility disabilities and up to three companions. If companion seating is not available because the ADA section is sold out, Rhythm City Casino Resort will offer seats as close as possible to the accessible seat, if available, at the purchase price of the other section.