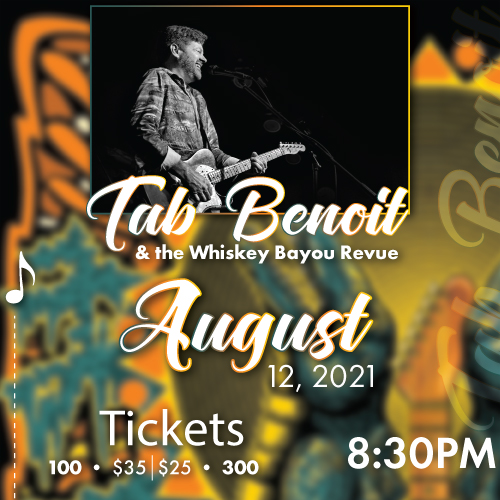 Tickets must be purchased in sets of 2 or 4 seats.

$35 seats will get you seating within the first 5 rows and early entry.
$25 seats are general admission and seating will be done on first come first serve basis.

*Back rows may be added if Covid-19 guidelines allow us to open more seats.*

One of the most impressive guitarists to emerge from the rich Bayous of Southern Louisiana in recent years, Tab Benoit’s guitar tone can be recognized before his Otis-Redding-ish voice resonates from the speakers. He doesn’t rely on any effects and his set up is simple. It consists of a guitar, cord, and Category 5 Amplifier. The effects that you hear come from his fingers.

Born on November 17, 1967, in Baton Rouge, Louisiana, Benoit grew up in the nearby oil and fishing town of Houma, where he still resides today. Musically, he was exposed early on to traditional Cajun waltzes and the country music broadcast on his hometown’s only radio station. Benoit’s father was himself a musician; as such, the family home was filled with various instruments. He began playing drums but switched to guitar because the only gigs to be had in rural Louisiana were held in churches and at church fairs, and organizers would not allow loud drums to be played at these events.

In the late 80’s Tab Benoit began hanging out at the Blues Box, a music club and cultural center in Baton Rouge run by guitarist Tabby Thomas. Playing guitar alongside Thomas, Raful Neal, Henry Gray and other high-profile regulars at the club, Benoit learned the blues first-hand from these living blues legends. He formed a trio in 1987 and began playing clubs in Baton Rouge and New Orleans.

Tickets are $35 (early entry and seating in first five rows) and $25 (General Admission) plus applicable taxes and fees (fees are waived when tickets are purchased at The Market gift shop inside Rhythm City Casino Resort). ADA seating for patrons with mobility disabilities are available upon request at the show.